LOWERING OF THE ELECTORAL AGE

In May 2018 Estonian National Youth Council in cooperation with Children’s Voice Association from Finland organized a thematic seminar in the Parliament of Estonia dedicated to Estonian experience in lowering the voting age for local government elections. The first international Vote@16 seminar was held on the occasion of Estonian and Finnish 100-year celebrations as well as lowering the voting right to 16 in Estonian municipal elections in 2017. The seminar was dedicated to exchanging experiences related to lowering the voting age to 16 on the European level. The seminar raised democracy sustainability, intergenerational justice, and citizenship education issues. The speakers were prominent international youth representatives, politicians, educators, and other professionals interested in advancing youth democratic values. The topics participants discussed at the seminar were the following:

Due to high interest from participants and partners, ENL decided to organize a second phase of the event which was held in April 2019 and focused on the possibility of lowering the voting age in European Parliament elections which have been one of the recommendations from the Parliament to member states of the EU. The seminar aimed to share arguments in favor or against the topic overall, investigate practices, data, and impact of European countries which already have lowered the voting age, and initiate dialogue between youth and decision-makers about each expectation and cooperation outlook. The topics were:

Lowering of the voting age

Lowering the voting age to 16 years of age has been a matter of debate all around the world for the last couple of decades and has been implemented in Estonia in 2017 on the level of municipal councils. Due to the necessity of giving young people broader opportunities to contribute to decision processes and creating a public discussion on the inclusion of youth, the Estonian National Youth Council has stood for lowering the voting age for already 10 years. The given change, together with supplementing other support structures, will help create a more effective environment to improve the inclusion of young people and give voice to their opinions.

In 2017 the Estonian National Youth Council committed to its aim to implement a nationwide information campaign among young people who were potential first-time voters. The given campaign was necessary first and foremost in order to explain to young people why voting is important and how to contribute to discussion processes on the local level. Based on the experiences of ENL thus far, the knowledge base of young people regarding elections is rather low.

The aim of lowering the voting age is to offer necessary and practical experiences of being a citizen to people as young as possible. This constitutes a supplement to primary, vocational, and secondary education because 16-year-olds are mainly in the 9th or 10th grade. ENL believes that 16-year-olds can adequately make political decisions because already in 2009 the results of a study completed by Anu Toots, a professor at Tallinn University, indicated that the political maturity of 16-year-olds is comparable to that of adults. Many important rights and obligations apply to young people even earlier: from the age of 14, a citizen can be prosecuted for a misdemeanor or crime; by 15 they have the right to marry provided both sets of parents agree; by 16 they can apply for a limited B-category driver’s permit.

Also, the right of the petition has been given to at least 16-year-olds. Lowering the voting age can help reach a demographical balance otherwise destabilised by an ageing population and young people will be given more attention in society and lawmaking. The experiences of Austria showed that as a result, young people’s interest in politics grew, the voting behaviour of young people did not differ radically from the average, and the topics concerning young people rose to the centre of attention more frequently.

During the general meeting of the Estonian National Youth Council (hereinafter the ENL) on 17th November 2007, a document headed “Position of ENL on Youth Policy: Youth Participation” was adopted in which lowering the voting age to 16 years of age was supported. The same was assured in the “ENL Youth Policy Platform” that was adopted during the ENL general meeting on 27th November 2010. Both these documents have two provisions that need to be implemented before lowering the voting age. The first is the regularisation of the obligation to include young people by the state and local governments.

The drafting of the plan concerning the lowering of the voting age begun at the beginning of April 2014, led by the ENL Youth Policy Advisor Harri Puskar. It included inputs and/or feedback from ENL members, the ENL youth policy network on Facebook, youth assemblies to parties represented in the Riigikogu, persons in charge of umbrella associations active in the field of youth, and the ENL office. The changes stated in the position have been discussed with various experts from foreign countries, the Austrian National Youth Council chairwoman Johanna Tradinik, also ministry representatives.

Kantar Emor did a study on young people’s electoral behaviour in the context of the 2017 local government elections. 59% of the respondents voted among the participants in this study. Among the ones that voted, there was a statistically above-average proportion of 17-year-olds and secondary school students. 41% of the respondents did not vote and the main reasons for forgoing their voting rights was either a low interest in politics (25%), lack of time (16%), and disillusionment with politics and politicians (11%).

In terms of politics and elections, young people consider it particularly important that ambassadors not abuse their votes, in other words, that they do not retreat from their campaign promises in forming coalitions and act accordingly even after becoming a council member. The greatest incentive in making a decision was the identity and party affiliation of the candidate, of which nearly a quarter of the young people based their decision on, somewhat less important was the experience of the candidate (17%) The identity of the candidate was on the average more important for North Estonian young people, their party affiliation for Tartu’s youth. Only 1% made their decision randomly, 2% made their decision based on alienation, and 8% voted based on their parents’ preferences. 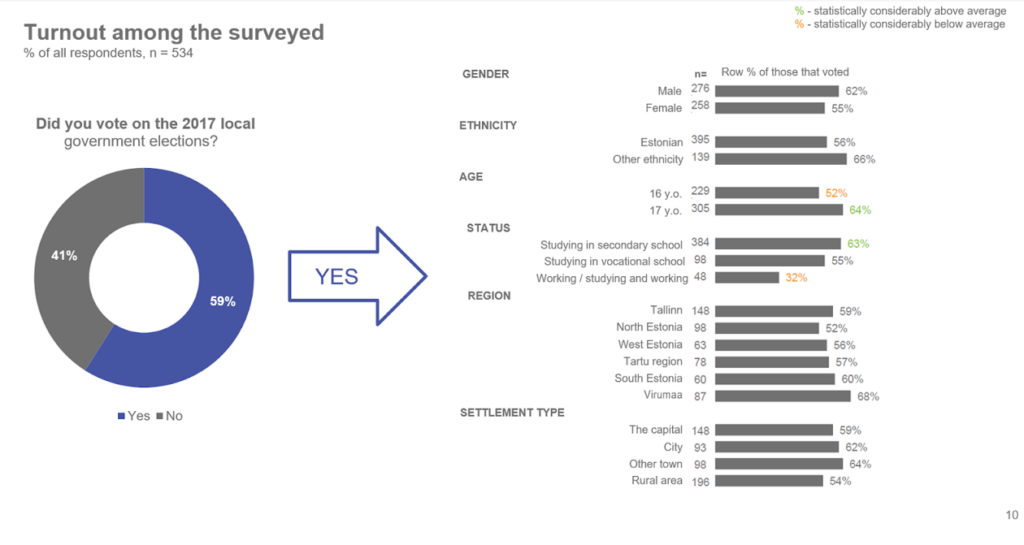 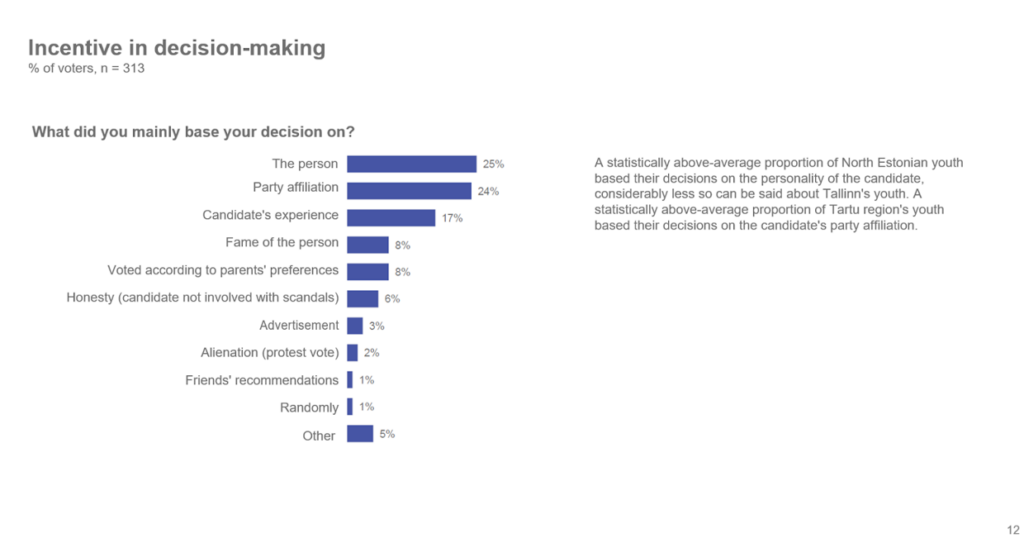 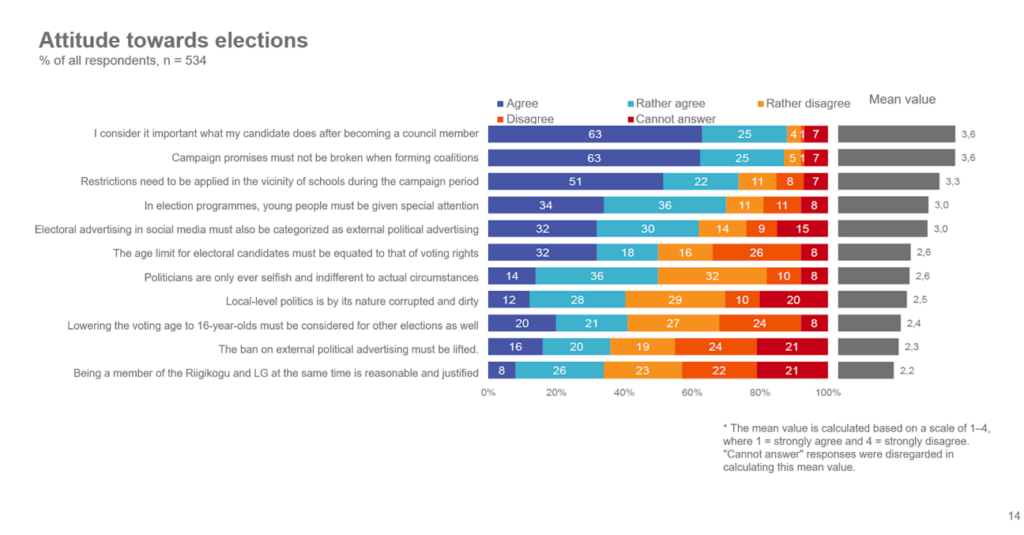 The position of ENL on the changes brought about by lowering the voting age. Harri Puskar